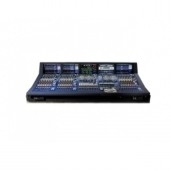 The XL8 live performance system is truly revolutionary and heralds Midas' entry into the digital mixing realm. However, this is not merely another digital mixing console. XL8 offers an incomparable design combining exemplary sound quality, flexibility and reliability with an ease and familiarity of use unrivalled by other digital control surfaces. XL8 is the first of a new generation of open-architecture, cross-platform, integrated audio control and distribution systems, which brings control of not only audio, but other aspects of a live performance to a single, intuitive control centre.

As well as offering Classic Midas audio quality and superb reliability, XL8 actually improves upon the performance of the analogue consoles, which have established Midas as the number one choice of sound engineers the world over. XL8 represents a new generation of networked systems, requiring only mics, amps and speakers to provide a complete audio system.

The XL8's open architecture ensures that both third-party hardware and software, including ??plug-ins can be easily integrated into the system. The very latest in high-speed networking technology ensures that XL8 will conform to all the Classic Midas brand values of sound quality, reliability and longevity; it will not be obsolete in a few years.