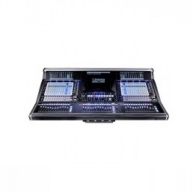 The SD5s worksurface is a low noise, heat dissipation worksurface benefiting from Hidden-til-lit (HTL) technology, yet its five digitally driven full colour TFT LCD screens, three of which are touch sensitive, have a new configuration that allows easy access to single or multiple users. There are also two interactive dynamic metering displays (IDM)) and instant access 'quick select' buttons which are positioned conveniently down the left side of the two channel screens for fast and intuitive navigation.

Incorporating the master screen into the worksurface meterbridge design has allowed for complete user feedback, but maintained a lower profile meter bridge. This still allows clear visibility of those on stage for the user, with everything in close reach to the mix position.

As with all SD range consoles, the SD5s superior headroom, dynamic range and audio quality are of paramount importance and its feature set surpasses any other console in its class.

As standard, the SD5 comes with a 2Gb fibre optic system, which is capable of running 448 channels of I/O at 96kHz, plus 56 console-to-console tie lines, allowing connection to up to 14 of the SD-Series racks. There are three redundant MADI ports and local I/O includes eight microphone inputs, eight line outputs and eight AES I/O (mono).