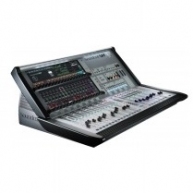 With the Soundcraft Vi Series now firmly established as a firm favourite digital desk on both the touring, broadcast and installed sound scenes, Soundcraft have taken this amazing platform to another, more affordable level with the release of the new Vi1 console.

Many users have asked for a smaller, lower-priced desk that still has the acclaimed VistonicsTM user interface, and of course the now-legendary optimal sound quality established with the Vi Series.

So here it is, the Soundcraft Vi1?.

A complete standalone console package with 32 channels of analogue input to 27 analogue outputs, plus 6 digital inputs, 4 Stereo FX Returns and 6 digital outputs in one chassis. As standard, Input to mix capacity is 46chs, but by adding a stagebox (compatible with the existing Vi racks), simultaneous channel count increases to 64. Channels are routable to 24 multifunction busses, plus LR and Mono Mix busses.

Up to 8 of the busses can be configured as Matrix mixes, each with up to 16 sources.

The surface is just over a metre wide, and includes 16 motorised channel faders with fixed and user-definable layers, 8 output/VCA faders and 2 master faders.

What's really cool about the Vi1 though, is the new Widescreen Vistonics interface, which will be instantly familiar to anyone who's driven a Vi6 or Vi4, as well as retaining the same 'walk-up' user-friendliness of the other Vi consoles. This new development displays all parameters for 16 channels side by side, on a single 22" Vistonics touch screen. The upper half of the screen handles the Output section control as well as Cue List or Menu displays. Parameter control is via two rows of 16 rotary encoders. Exactly the same channel functionality as the Vi6 and Vi4 is available here, along with all the same core snapshot, talkback and monitoring facilities.

Naturally, the Vi1 inherits many of the facilities of its larger siblings, including Soundcraft FaderGlow?, 4 stereo Lexicon effects engines, BSS Audio graphic EQs on all output busses, and integral dynamics on all channels.

The desk is compatible with Vi4 and Vi6 show files through the Virtual Vi offline editor, which is available as a free download.

As you'd expect, the price of the Vi1 is extremely attractive, which is sure to make it a clear winner with engineers and sound companies.