Three grandMA2 light consoles were specified by lighting and visual control specialists FIX8 as the most flexible, reliable and expedient solution to run the production lighting and video at the 2011 iTunes Festival.The month-long, high profile event was staged at London's legendary Roundhouse venue in Camden Town, featurin... 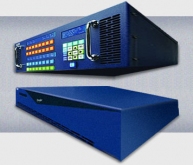 Everyone from the most sophisticated pro to the first-time user can find a Spyder that's perfect for them. With over a dozen models to choose from, you can configure any system to suit your needs. Spyder is available in the two-rack 200 Series, or the three-rack 300 Series. And expansion options allow you to add inputs, outputs and extra processing capabilities when necessary. Whether you're a technology wizard or a mere apprentice, prepare to conjure visual magic.