Previously used on an installation. Maintained by in house technicians. 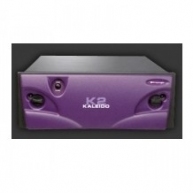 The Kaleido-K2 Ultra High Resolution Virtual Monitor Wall Processor is designed as the ultimate Solution to signal
monitoring requirements. It accepts inputs in many standard formats; each input is equipped with its own advanced
de-interlacing and scaling engine for highest display quality. Internal processing is handled at 1600x1200 pixel
resolution, and each input can be scaled between 1/16 of its original size and the full 1600x1200 screen. Graphic
Elements are keyed with one-pixel precision.