Digico's FPGA technology that is built into the SD9 is getting a boost from a new release of free software and firmware upgrades. The upgrades are supposed to free up more of the FPGA's processing power. In some cases they are reporting up to 100% power on select features.This upgrade is free to call existings SD9 owners an... 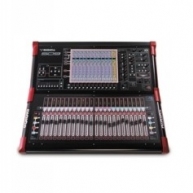 DiGiCo has introduced the SD9, a complete, integrated system, which includes the mixing surface, a D-Rack digital stage interface and CAT 5E digital multicore, with the additional ability to simultaneously record 56 channels direct to multitrack software or DAW.

The SD9 also features many other DiGiCo innovations, including snapshots, global scope, channel specific recall scope per snapshot, and a global crossfade for each console section, plus eight user Macros for fast access to presets.

The new D-Rack, which is an integral part of the SD9 system and connected to the work surface by a digital CAT 5E Cable (included), provides 32 microphone inputs, eight line outputs and eight modular outputs that can be selected as either analog or AES, providing a capacity of 32 ins and 16 outs.