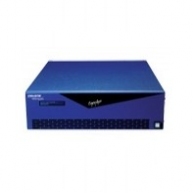 The power and flexibility of Vistas video switchers
and real-time windowing and composition
products combined with the power, performance
and reliability of award-winning Christie
projection systems ensures that whatever you
visualize your Christie Solution can display it.
Vista Systems switchers have become the
industry standard for live multiple-destination
video and data mixed signal switching.
Modularity allows you to mix and match
Perhaps the best thing about the Spyder system
is its incredible versatility. Between the 200
and 300 Series, there are more than 10 different
models to choose from, all of which are perfectly
compatible and configurable with each other.
You can create almost any size system you
need, depending on your budget, and the
demands of your particular event. Choice is
the operative word made possible through
the modular design that allows you to link
together the optimum number of inputs,
outputs and processors.
With processing this easy,
everyone will be doing it
Spyders intuitive user interface allows you
to perform even the most complex tasks with
simplicity and ease. Start by building virtual
displays inside your computer that are truly
independent of the number of outputs you use.
Mix any input anywhere on any display and
create a variety of motion effects and controls
using simple keyframes to plot the movement.
While youre at it, create any kind of window
border or drop shadow with adjustable color,
width, softness, shadow offset and transparency.
It is easy!
And, we havent even mentioned Spyders
wide-screen capabilities. Outputs which can
be projectors, LED walls, video walls, Recording
devices, operator Monitors, and the like can
overlap horizontally or vertically with 10-bit edge
blending and user-definable blend regions that
define the words seamless and awesome.
Input formats
Analog RGB (SOG, Composite or Separate Sync)
Analog YUV
SDI
HD-SDI
DVI
DVI-Dual
Analog Composite (optional)
S-video (optional)
Output formats
(24p, NTSC, PAL, and SECAM
frame rates supported)
Analog RGB (SOG, Composite or Separate Sync)
Analog YUV
SDI
HD-SDI
DVI
DVI-Dual
DVI-Twin (10-bit DVI)
Analog Composite (optional)
S-video (optional)