These Vari-Lite VL3500 Spot movers were used in an installation and have been well maintained. They are in good working condition.

The VARI*LITE VL3500 Spot luminaire maintains the same high standards for imagery, beam control, color and brightness set by the original VARI*LITE Series 3000 Spot luminaires, but with the added feature of a four-blade shutter mechanism that allows the blades to be operated independently or in unison on two planes for a clear and crisp image.

An upper enclosure houses the control electronics as well as the arc power supply for the 1200 watt short arc lamp. The arc power supply is power factor corrected for efficient power distribution. The VL3500 Spot luminaire can be controlled from a wide variety of DMX512 consoles.

The luminaire is the same size as all other VARI*LITE Series 3000 luminaires, providing a consistent hang configuration and appearance no matter which luminaire type is required.

A new branch of the famous Nomads Club has opened its doors in the Turkish capital Istanbul, boasting a new L-ACOUSTICS coaxial sound system installation.Nomads Istanbul, as the club is known, closely follows the original Amsterdam venue concept, doling out an exotic fusion of Eastern and European cultures in both its cuisi... 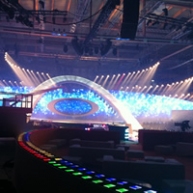 Rasmus Bremer at Litecom was in need of purchasing thirty VL500 Wash for a large show. The choices on the market for new or used fixtures was small, but Solaris was able to secure the necessary fixtures for Litecom."Needing to deliver more than 200 VL500 to different customers in the Nordic countries, we needed 30 more fixt...

Engineers at the Helsinki Music Hall in Finland have completed the installation of a new KIVA WST line source system.The 17,000-seater hall is used by the Helsinki Philharmonic Orchestra, the Sibelius Academy and the Radio Symphony Orchestra, amongst others, and is also booked throughout the year for various concerts.The L-...