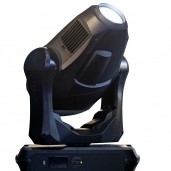 MAC Quantum Profile
MAC Quantum Profile is a fully-featured LED profile that sets new standards for combined performance, weight and size.
This workhorse represents the latest in LED technology which in combination with Martins proprietary optical design delivers a crisp and bright output. Any concerns about lamp aging, shifts in color temperatures, green color points, misaligned lamps and declining output are eliminated, as consistent LED technology guarantees that the last show on the tour looks as good as the first.
The MAC Quantum Profile is designed to please all around. Weighing in at only 22 kg without compromising performance and speed, its compact size and
precise movements will wow audiences, designers and technicians alike. And being great value for money, the MAC Quantum Profile offers a speedy return.
Flat field, crisp image, high contrast
First real alternative to a 700 watt HID fixture
Very low weight and compact design
Super high-speed movements and effects
Full feature set including color mixing and 1:3 zoom
Consistent photometric performance via LED technology