Like new condition. Previously used in various corporate events. Cleaned and maintained by in house technicians. 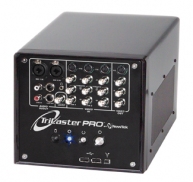 Schools, sProts teams, broadcasters, worship facilities, government agencies and many others have come to rely on the award-winning TriCaster? PRO for Portable live production and live streaming.