This is a package of (2) Innovason SY80 that have been well maintained by a top notch in-house service center. 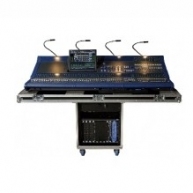 Designed for live sound touring, fixed installation, and broadcast applications, the flagship Sy80 is a powerful mixing tool featuring Innovason's unique SmartFAD technology that allows users to define the function of any fader on the console. With 80 faders, 104 channels, up to 144 outputs, 48 mixing buses and the advanced Sensoft software, the Sy80 console enables each user to define the exact configuration they need for the mix of the moment. Audio connectivity is via Muxipaire and the industry standard EtherSound protocol for maximum network flexibility. Compatible with all of the latest I/O modules and internal effects plug-ins for enhanced DSP performance, the Sy80 offers greater mixing capabilities than ever before.

Each of the 80 faders can be defined as an input channel:
Mono
Stereo
Multiple expanded fader or a mixing bus, mono, stereo or LCR:
VCA (Versatile Controlled Amplifier)
Group / Subgroup
Aux
Master
Matrix