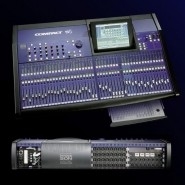 Little brother to the flagship Sy80, the SY48 is THE perfect all-round, take-it-anywhere console. So much functionality and so much instantaneous, direct performance control in so little space once you've tried it, you'll wonder how you ever managed without it! With its 48 motorized faders in a remarkably small footprint, Sy48 is capable of mixing up to 72 inputs simultaneously into 40 mix busses. Whatever the environment, from touring to fixed installations and broadcast, Sy48 brings the best of digital audio technology, and of course the legendary INNOVASON sound to the art of live mixing.

Mix Capacity
Mixing for up to 72 channels

Software - Sensoft
Save configurations for instant recall
Snapshot automation with manual, or MIDI Synchronisation
Enhanced show software with new Q/ Page display and control for theatre applications, including Relax, Off-Line and OverRam
Off-Line programming on all PC running under XP for show preparation and backups