Si2 in Excellent condition.
The console come in a custom built flight case. The flight case can be used as a table with built in dog house. 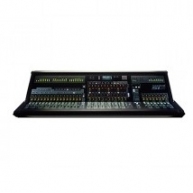 With all input and output connections and Power Supply on board, the Si2 can simply drop in where an existing analogue console sits, utilising existing copper Cable snakes and splitter systems.