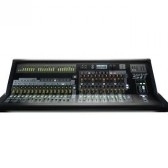 The new Si1 has a very compact footprint of just 1200mm width, meaning it fits nicely into space-restricted areas such as theatres, small venues, and Houses of Worship, and of course comes at an extremely competitive price.

As standard the Si1 has 32 mic inputs mapped on 16 faders, and with four dedicated Stereo Line channels, four dedicated FX Returns from the four stereo Lexicon FX processors can mix up to 48 inputs. Eight balanced insert sends and returns are provided, along with the same bus structure as the Si2 and Si3 of 24 Group/Aux busses, 8 Matrix busses and a full complement of monitor talkback and main bus outputs. These buses may be freely assigned to any of the 16 physical XLR connectors in addition to the dedicated MIX and monitoring output XLRs. Every bus has a dedicated 30-band BSS Audio graphic EQ, permanently patched in with no additional drain on DSP resource. Three option card slots are provided for further expansion such as Recording of all the channel direct output feeds or increasing the number of channels to mix.

Such is the power and topology of the Si Series that the separate DSP and control engines allow you to make any system or function changes live with no interruption in the audio.

Like the Si3 and Si2, the Si1 uses a combination of rotary encoders and OLED screens on every channel so the engineer mixes at source, without recourse to a central screen, an interface welcomed by many engineers since the Si3's launch last year. Using the center section and channel encoders, it is possible to simultaneously monitor and control input EQ, input dynamics and output EQ. Four assignable on-board Lexicon effect engines supplement 4 stereo inputs to provide a really powerful mix package in a width of 1.2m. Soundcraft's offline editor program, Virtual Si, can also be used to setup and manage complete shows offline, for later download to an Si1 console through a USB memory key.

With a wealth of input and output connections and Power Supply on board, the Si1 can simply drop in where an existing analogue console sat, utilising existing copper cable snakes and splitter systems.

On the rear of this highly-featured console are a host of I/O connectors to cover almost any need. Thirty-two XLR's for the mic/line inputs, 4 stereo line level inputs, 16 bus output XLR's, dedicated XLRs for Left/Right/Centre mix output, Left/Right/Centre monitor output, internal and external talkback and Oscillator connections. There are also 8 analogue insert connections which allow outboard processing to be inserted into any input channel or output bus.

To compliment the Soundcraft Si1, an offline editor (Virtual Si) is available. For more information on the Virtual Si, click here.

As well as the wealth of experience in digital platform development that Studer and Soundcraft have with the Vista and Soundcraft Vi Series', the Soundcraft Si1 also draws expertise from other sister companies within Harman, with built-in effect processors from Lexicon and gates & compressors with the heritage of dbx and BSS Audio.