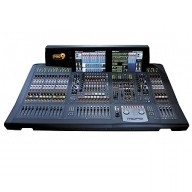 PRO9 comprises a control surface (console), a DL371 modular, upgradeable, remote processing engine, and a networked system of I/O devices (up to 11 discrete devices) all connected by inexpensive CAT 5e cabling. Each PRO9 Touring Package ships complete with both Midas DL351 and DL451 modular stage boxes, featuring 56 and 24 Midas mic inputs respectively, plus 8 analogue XLR outputs in each stage box's default configuration. PRO9 is also compatible with any of the Midas DL series digital I/O units. In addition to this, the PRO9 console has 3 card slots on its rear panel which can house any combination of Midas DL series I/O cards. The default configuration is 8 line inputs and 8 analogue outputs with TRS connectors, 8 XLR analogue outputs, 8 digital inputs and 8 digital outputs on 4 AES3 input/output pairs. These card slots can be quickly reconfigured with whatever I/O is required. Redundant Power Supplies are included with every system as part of the PRO9s failure-tolerant architecture.

A total of 88 input channels have routing to 35 phase-coherent mix buses, which comprise 16 user-configurable buses (which can be mixes, subgroups or mix minus groups), and 16 matrix buses. The Matrix buses source from inputs, as well as groups, and so can be used as 16 additional auxes (monitor mix and FX sends) which provides a total of 32 mixes (plus L, R & Mono) for monitor mixing duties. All buses can be linked as stereo pairs (except the mono bus).