Solaris Network proudly announces the opening of our new European office in Germany. Solaris is always looking for new ways to improve our service to you, our faithful customers. We have been servicing clients in Europe for almost 10 years now and so have decided it is finally time to place an office within Europe to better...

LeedsUniversity's1,000 capacity Stylus , an all purpose venue used bystudentsfor a range concerts and liveperformances, has been outfitted with a brand new L-ACOUSTICS KARAi system as part of a major refurbishment.The installation was a tricky one, as it involved fitting 6 KARAi's on each side of the venue, and it had to be... 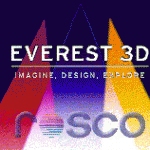 Rosco's Everest 3D offers student designers and experienced professionals an affordable tool to accelerate the process of creating light plots. This Windows-based program creates either two-dimensional or three-dimensional stage pictures, in color, as you design your plot. As you refine your design, the Everest 3D screen ad...

Solaris is proud to announce Steve Smith as the new sales manager for US & International sales. Steve comes to Solaris with many years of sales and sales management experience for various financial institutions. He offers our customers personal attention in their quest to locate the proper equipment based on their needs.