That board was previously installed in church when I bought it for a project which was never realized. Since then it was stored in a safe place in a good warehouse. The board is clean and in a very good working condition. It was tested to confirm that. Software was upgraded in 2004.
High quality preamps great for studio or any permanent installation. Youll have the great analog sound with digital abilities for convenient work with it. Only few places/venues could afford to buy those boards having to pay a LOT of money (up to $120,000) for them and they did because of high quality of these boards. Now you can buy one for a small fraction of the price and have this luxury board working for you. Please dont hesitate to contact me with your questions. 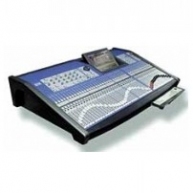