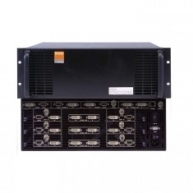 The Encore Video Processor (VP) is the heart of the Encore Presentation System, providing all input, output, layering and wide screen "blending" cicuitry. Packaged as a 3RU rackmount unit, each VP can be outfitted with one, two or three Mix/Effect (M/E) boards to meet different application requirements. Models ordered with one or two M/Es can be easily upgraded by adding additional M/E boards.

Within an Encore system, each VP is essentiallya single destination, and multiple VPs can be combined to create advanced systems comprised of both single and blended destinations. Each VP's output board provides Program and Preview outputs in both analog and digital formats, plus interface, blending and data-doubling functions which are required to support wide screen applications.

In terms of creativity, PIPs and KEYs can be sized and positioned anywhere on screen in real-time. Z-order control is used to assign layer priorities to each PIP or KEY, and PIPS can also be linked in pairs to support transitions, or displayed (and transitioned) independently. Keys are used to provide effects such as titles and special masks.