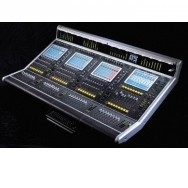 The D5 Live 56 is a 64 channel worksurface and comes with one remote (stage end) DiGiRack, which contains the 56 A/D and 8 D/A converters and is connected to the console via optical fibre. 150m of fibre Cable is provided with the system, reducing the length of copper wire between microphone and desk to, at most, a few metres. A second, local DiGiRack (which is common to all models) sits next to the console with a further 56 external I/Os for inserts, effect sends, local monitoring and playback.

The powerful DSP engine is shielded inside the console's rigid steel and aluminium chassis on a slide-out tray for easy maintenance and provides every channel with full processing and full functionality at all times, so there is no variation in performance no matter how many features are in simultaneous use. To transfer console settings and automation snapshots to another D5 Live, or to edit your console settings on a laptop PC, simply plug in the miniature USB key to a port on the front of the desk. To use the console for multitrack live Recording, simply connect your DiGiTracks recorder to the console via the single MADI port.On the rear are the integral dual-redundant power supplies, which are both hot-swappable and auto-switching, along with the modem port for diagnostics and software updates. In the event of a Power Supply problem, the D5 Live will automatically switch power supplies over without any loss of audio or control status, and there's no audio interruption, either, in the unlikely event of the console needing to be rebooted during a show. The overall design approach means the desk is extremely fast to set up and to pack away after a show. The console's small footprint and relatively light weight make it possible for two people to lift it, although four would be more comfortable.