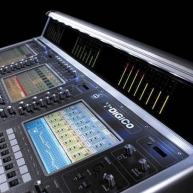 D1 Live 40, with its 40 mic/line inputs and MADI connectivity, is the perfect addition to an installation or rental system. The 'local' DiGiRack, configured as 40 mic/line ins plus 24 line outs and located next to the console, performs the mic / line input channel conversion and enables theatres and regional audio companies to use an existing copper multicore from stage thus creating a direct replacement for an analogue console. Like the D5 Live, the D1 Live 40 is supplied with full input EQ, dynamics processing and onboard effects, 38x8 Matrix, 16 VCA control groups and a full effects system, eliminating the need for most external processing.

The DigiCo D1 Live is your passport to our new world of digital mixing, in a cost effective and flexible system.

Based on the award-winning D5 Live, the console which broke the mould of digital live mixing, the D1 provides the same outstanding sonic purity and much of its powerful, instantly accessible control, in an even more compact frame and at an Access All Areas price!

The benefits of this system are equally compelling in a host of different applications: the tactile, intuitive, hands-on simplicity of the worksurface with its clear, bright backlit TFT touch screens, snapshot controlled fully automated moving-fader mixing, powerful built-in dynamics and digital effects and complete recallability of every function.

The D1 Live provides simultaneous processing of 64 mono/stereo channels and can be expanded up to 160 channels, in any combination of mono/stereo with full access to 224 inputs and 224 outputs. Each channel provides full routing from the remote mic pre amps, 240mS delay, Hi and lo pass filters, 4 fully parametric eq's and dynamics with side chain filtering.

The 25 layered faders, are grouped in blocks of 8 with 6 user definable fader banks per section.

The 40 output busses can be used for up to 28 mono/stereo auxes or up to 36 mono/stereo/LCR (S)/5.1 surround busses, each with a limiter and insert point. It also provides a user configurable 38x8 Matrix, all with insert points.

All 16 IPC's (insertable processing channels) include 6-band, fully parametric EQ, compressor and up to 510mS of delay. They can be inserted across any input or output, or used as individual output processors, making the D1 a powerful system controller. With 16 VCA style control/mute groups able to control inputs and outputs, D1 is ready for any kind of application, and the flexible, modular remote input and output racks make it easy to adapt it to any system.

Add to that road-proven stability and reliability, the tough but comparatively lightweight physical design and small, space-saving footprint, and you have a mixing system that is suited to high quality installations as it is to medium-size and regional rental companies or as a logical companion console to a D5 system.

With all systems, you can record live direct to a multitrack hard disk recorder, as well as storing a complete show's settings on a tiny USB key for total portability from one DigiCo D1 or D5 to another, as well as providing compatibility with the SoundTracs family of post production, broadcast and music Recording consoles.