Used on various corporate events. Cleaned, tested, and maintained by in house technicians.

(8) VT 4880
Covers and dollies are included with this package. 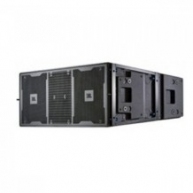