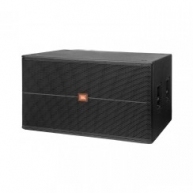 The SRX728S is a high power
Subwoofer system containing two
2268H neodymium magnet, patented*
Differential Drive, 18" woofers in a
front-loaded, vented enclosure. The
enclosure is designed to present a
minimum frontal area. The system
offers complete input connection
flexibility for compatibility with a
variety of cabling schemes. A recessed,
external switch allows selection of
either contacts +1/-1 or +2/-2. By
relocating an internal connector, it is
also possible to drive each woofer
discretely from a separate amplifier
channel.
The enclosure is constructed of top
quality birch plywood and coated in
JBL's rugged DuraFlex? finish. Each
woofer is housed in an isolated
chamber and the enclosure is heavily
braced to maximize low-frequency
performance. The attractive CNCmachined,
16-gauge steel grille is
internally lined with acoustically
transparent foam to provide additional
driver protection and give a very
professional appearance.