As new
used in theater. 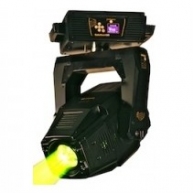 The new SolaSpot LED...The highest performance LED spot in its class. The industry is about to get a favorite new lighting tool!

Including High End Systems patented lens defogger, SolaSpot LED is yet another innovative step towards the future. SolaSpot LED is the most advanced and full featured LED moving yoke on the market today!