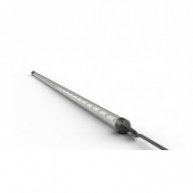 The LT-100 comprises a series of 1-metre and 2-metre long graphic tubes, loaded with RGB LEDs at 35 mm pixel pitch all DMX drivable via any proprietary media server, or pixel mapping DMX consol.

This 3D LED graphic tube can be suspended from the ceiling, providing a staggering overhead 3D vertical and horizontal zip effect. However, it is not limited to a suspension mode, as it can be floor-mounted or integrated into a scenery in creative ways.

The theory of pixel mapping is that two dimensional objects are transformed into three dimensions with the help of advanced programming techniques; thus each LT-100 LED pixel can be addressed individually enabling the LD to create genuine 3D lighting effects, such as 3D Waves or 3D bars which can be easily manipulated in terms of speed, colour, brightness, direction, and much more.

This creativity will be extended further by the future release the smaller length LT-64, which is only 64 cm long.