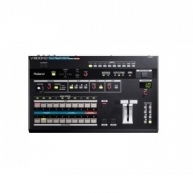 PICTURE QUALITY AT THE PINNACLE OF HIGH DEFINITION. EIGHT MULTI-FORMAT CHANNELS FROM SIXTEEN INPUTS.
The V-800HD Live Video Switcher is ideal for any live event orinstallation that requires the freedom to connect any type of sourcewhether it be digital or analog, computer or video format.

Roland Corporation U.S. is a leading manufacturer and distributor of electronic musical instruments including keyboards and synthesizers, guitar products, electronic percussion kits, digital recording equipment, amplifiers and audio processing devices. With over 25 years of musical instrument development, Roland sets the standards in music technology for the world to follow.