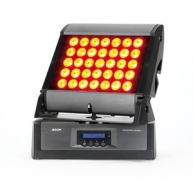 PALCO FULL COLOR + as a member of the PALCO family shares its attractive external appearance, which in this case hides a decided vocation for power and quality colour mixing.

Palco Full Color + uses a special combination of LEDs to provide a custom full colour system. The result enables the machine to generate very powerful projections, but with an exceptionally homogeneous colour over the lighted surface and elimination of the coloured shadow effect.

SGMs Full Color concept makes this model ideal for entertainment and architectural applications, with the difference that it is also attractive when filmed live on TV or on any live stage.