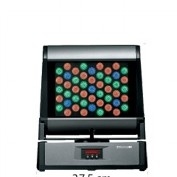 PALCO 5 has been fitted with a new very powerful LED model (the k 2), thanks to which, compared to the other SGM LED LINE models, it is able to ensure remarkable luminosity with decidedly limited energy consumption.
PALCO 5 is, therefore, an extremely specific fixture, when its necessary to illuminate large walls or cover longer distances.

In matters of optics, it offers the same choice of interchangeable lenses as Palco 3, which easily adapt to the various types of surfaces or objects to illuminate. Its high power, silent operation and protection to IP55 make PALCO 5 the ideal fixtures for lighting interiors (museums, art galleries, libraries, television studios, etc.) and above all for outdoor applications (architectural lighting in urban locations, monuments, buildings, etc.).