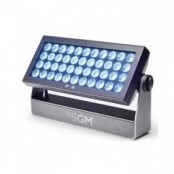 The P-5 has taken the popular Palco 5 as its design base and transformed into an IP65 rated fixture - suitable for outdoor use.
The low-profile fixed, rectangular, full-color LED wash light incorporates 44 x RGBW 10W LEDs. Combined with a small footprint, the power consumption is reduced to just 410W while the LED source life expectancy is 50,000 hours.

As with all SGMs new LED models, cooling methods have been improved via rectangular heat-sinks, set-up and address procedures improved with the aid of internal diagnostics, and control procedures implemented to ensure flicker-free fixtures.