Offers several control modes depending on the user’s choice and programming constraints. The reduced mode limits the number of control channels to 18 whilst providing access to a library of pre-programmed effects; the extended 256-channel mode, on the other hand, enables the user to access all the functionalities with individual control over each light source. 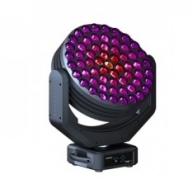 The MAGICRINGR9 is the most powerful and extravagant luminaire in this new range. It is also the most RADICAL in terms of its dimensions, but especially due to its excessiveness. With an overall flux of 29,000 lumen and a centre beam luminous intensity of more than 3,200,000 candelas, it is reserved for extreme uses. Just like the MAGICBLADER and the MAGICPANELR, it offers double continuous rotation on PAN/TILT axes, which is controlled by powerful three-phase stepper motors.