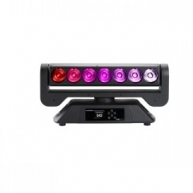 The MAGICBLADE-R is a new design that just like the MAGICPANEL offers continuous double rotation on PAN/TILT axes. What sets this luminaire apart, is the layout of the in-line light sources paired with the highly intensive angle of the optics, which allows the creation of light curtains with genuine overall consistency. In fact, on stage, the creation of virtual dcors requires very high centre beam luminous intensity to enable excellent visual perception in an environment saturated with light. The possibility of installing the product in any position and the individual control of the 7 RGBW LED sources allows for the creation of a multitude of new effects.