Fitted with 25 x 15-watt LED RGBW sources, each MAGICPANEL-R offers an overall flux of 11500 lumen and a centre beam luminous intensity of 1,350,000 candela for an overall consumption of a mere 450 watts, which translates into a visual perception that is twice as high as the 45 millimeter optics for 30% less power consumption. 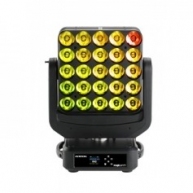 The MAGICPANEL-R represents a declension pattern over the famous MAGICPANEL602, which has enjoyed huge international success since its launch at Prolight+Sound 2013. The integration of the features specific to the RADICAL range paired with continuous double rotation on two axes and a 5 X 5 Matrix with a central point once again allows us to push the boundaries of imagination.