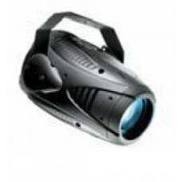 Moving Mirror Scanners are often used for club lighting, as well as for stage lighting, and are quite similar in concept to moving lights in that they offer increased versatility and can be used to create more complex special effects than conventional stage lights. Scanners have actually been around for years â?? indeed, they were the first ever kind of moving lights, preceding the more popular intelligent lights that are now used today. The main different between moving mirror light scanners is that, unlike more modern moving lights that have mechanical light fixtures, scanners rely on â??mirrors that moveâ?ť to direct the light beam, rather than moving light components. The fixture of the scanning head light doesnâ??t actually move by itself. Rather, it contains a built in mirror fixed to a pivot point that moves around and directs the beam of light which is focused onto it. Much like a moving lights, scanners or club lighting can be pre-programmed before a production so that the operator doesnâ??t have to control the light through the duration of the show, though of course some skilled operators prefer to operate the lights manually, during the performance, if they have the experience to do so. Scanners are available in a wide range of different sizes, and offer many different types of features to lighting technicians. Features include high-resolution stepping, high-resolution glass gobos with indexing and rotation, color mixing, mechanical dimming, remote focus, electronic strobing and many more.