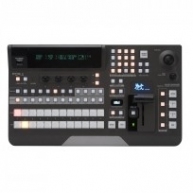 The HVS-300HS is the newest addition to FOR-As popular Hanabi series and represents one of the most powerful, compact, broadcast level switchers on the market. Although small, its 1 Rack Unit main frame is packed with features including; Frame synchronizing and re-sizing engine on every channel which allow any Standard Definition equipment to be used in full HD mode. It also has plenty of wipe patterns including 2D and 3D DVE transitions. The base unit also has keyer with chroma key, DSK, Dual picture in picture, 16-channel Multi Viewer, Still Stores and much more. It is perfectly suited for a wide-range of applications including studio production, event and sports coverage, news, live staging and corporate use.