Previously used on a church installation. Cleaned, maintained, and tested by authorized technicians. 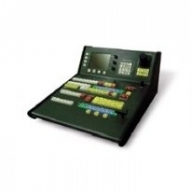 The Encore Controller SC supports up to 24 inputs and six destinations, comprised of Encore Video Processors, ScreenPRO-II and ImagePRO processors. Designed for both single screen and wide screen blended destinations, the Controller SC offers 64 presets, plus almost all the features included with the larger Controller LC. The SC's compact design is ideal for tight production environments, and is just as roadworthy as the larger model LC.