Analog Way is a leading designer and manufacturer of innovative image converters. Analog Way was founded in 1989 by Pierre Berthet and Marc Loret, two pioneers in the computer to video scan conversion technology field. The company headquarters is... 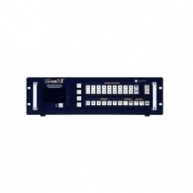 Analog Way is a leading designer and manufacturer of innovative image converters. Analog Way was founded in 1989 by Pierre Berthet and Marc Loret, two pioneers in the computer to video scan conversion technology field. The company headquarters is located in Paris, France. Our Research & Development, Design, Engineering, Manufacturing, Sales and Marketing operations are performed in Paris, France. In addition, Analog Way includes two wholly owned subsidiaries, in New York and Singapore. Our New-York office started its operations in September 1998 and an office on the American West Coast was also opened in 2004. The Singapore office started its operations in 2002.