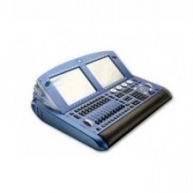 The Wholehog 3 represents the contemporary evolution of a world-renowned lighting console legacy. It has a refined and sophisticated presence that's unmistakable: the unique Silhouette, precision-machined aluminum and sleek blue anodized finish. Sophisticated engineering and well established control surfaces ensure a creative programming experience. With the perfect blend of style and function, the Wholehog 3 console Stands at the top of the Wholehog line as a Leader for all types of productions.