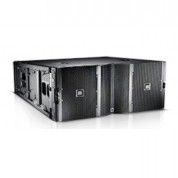 Alternatively, S28 arrays (cardioid or front-firing) can be suspended beside or behind V25 arrays. For theatrical sound design, S28 can be suspended in the middle of flown V25 arrays to facilitate balcony and floor coverage by allowing improved underbalcony penetration. Larger cardioid configurations are also effective where S28 is suspended or ground-stacked in multiple cardioid blocks, each BLOCK consisting of 3 enclosures (2 front-firing, 1 rear-firing).