Unit was only used three times. 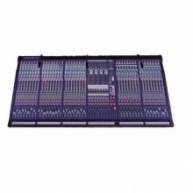 Verona is, quite simply, the desk the industry has been asking Midas for.

It takes the concept of the ultra-compact Venice, Midas' best selling console of all time, and elevates it to the next level. Verona delivers more inputs, more features, along with legendary Midas quality in a package that revolutionises the 8 buss market. Visually, the console looks stunning; despite it's physically modest proportions, it feels like a full-sized Midas to work on; and of course, most importantly of all, it sounds as good as it looks.

So what exactly is Verona?

Firstly, it's a truly professional desk aimed squarely at the professional market. Mechanically and electronically Verona is much more than just another 8-bus console. If you are primarily motivated by audio quality, rigid mechanical construction, long-term reliability and high residual values, then it is THE 8-buss console.

The Verona series consists of 6 models ranging from 24 up to a massive 64 inputs, and incorporates all the features and components that make it look, sound and feel like a true Midas. It has been designed from the ground up by the same team responsible for the XL4 and the Heritage Series consoles, including the industry-standard Heritage 3000.

Anyone who has ever bought a Venice and loved it is going to be captivated by the Verona you get more inputs, more features and that all-important Midas quality. Available as an install or touring package the Verona will handle anything from houses of worship to broadcast / Recording, theatre to corporate applications, and of course concert sound.