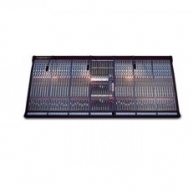 Siena is more than a Verona with extra auxes. The buss structure has been redesigned to be more appropriate for monitor use. Sophisticated engineering solutions have been employed, such as the advanced Solo Tracking System, switched inserts on outputs, and a powerful logic controlled solo system.