One of these units is a C1 and the other two units are W1. Used only on demos. 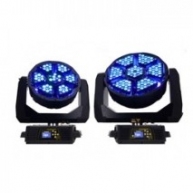 Offering awesome power, incredible speed and total flexibility, SHAPESHIFTER is the new and innovative range from High End Systems. Designed by Richard Belliveau, prepare to have your mind shifted!

7 independently controlled modules housed in one moving fixture create a multitude of highly defined beams coming together to form an amazing array of effects from the incredibly bold to the ultra subtle. All Elements of the fixture are lightning fast giving the designer the largest palette of creative options available, all from one fixture.

Alongside total control High End Systems has provided Module Macros with almost 150 available to the user. These have been custom written to provide the user with a fast and intuitive way to create powerful effects in a very short space of time. These Macros are further enhanced by speed and cross fade controls.

High End Systems are true innovators and SHAPESHIFTER is the fulcrum of the new generation of LED products being released. RESHAPE THE GAME!