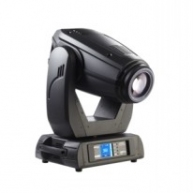 The optical system produces a very smooth, high quality light output of rich, beautiful colours with no shadows and utilizes a versatile zoom of 10 45 degrees.