Latest hardware. SSD for system. New HDDs for media.
1 system from 2012 September, another from 2009 November. Used for TV shows. 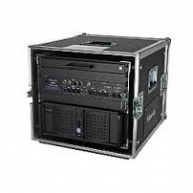