Only used 4-5 times each year on tours. Cleaned and maintained in house.

Featured & Other Input and Output Processors 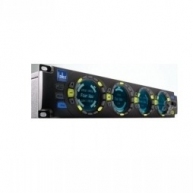 Input/output processors are used for multichannel sound recording in real time. Capable of studio-grade fidelity, these specialized soundcards are used in professional sound engineering and make use of an audio stream input output protocol. These kinds of I/O audio processor soundcards are fitted with multiple input and output connections, usually USB, FireWire or some kind of optical interface so that a larger amount of data can be carried than with a normal sound card. Input/output processors also emphasize higher fidelity and sampling rates, as they are intended for real-time audio mixing and multi-channel recording. Due to their highly specialized nature, input/output processors are not considered practical for home users, as they lack certain features common in consumer soundcards, such as real-time ambience effects, environmental audio extensions and the ability to accelerate hardware in video games, as these are considered to be undesirable. Input/output processors feature a specially designed protocol that is capable of handling numerous inputs and outputs for audio, as consumer soundcards have a sampling latency that is comparatively large, and therefore unsuitable for professional applications. Consumer soundcards simply take too long to convert and transfer a sound sample to the hard drive of a computer, and they are also limited in the amount of bit depths and effective sampling rates they can process. Input/output processors typically have multiple channels, rather than just the two provided on most consumer soundcards, and there connectors are more accessible.