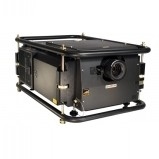 In addition to the active 3D capability, the LIGHTNING 3D models also include DPs new FastFrame technology, a revolutionary combination of hardware and firmware that vastly reduces the artifacts and image blur typically associated with rapidly moving displayed content. The benefits of FastFrame are especially important for simulation environments such as commercial and military flight training, and other applications where maintaining the visual integrity of high-speed imagery is vital.