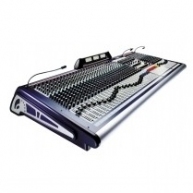 Augmenting the already highly successful GB4 console range is the new GB8 8-bus console. The GB4 has found many friends including the Cavern Club in Liverpool, and in use at the Bedford Venue in South London.