This is complete system and is in excellent condition and has been very gently used on various corporate events.

These are amazing and reliable units from MARTIN. All signal and power comes from the bumper and is daisy chained internally from panel to panel. No endless daisy chaining of power and signal cable.

This also comes with two of the Martin P3-100 system processor! 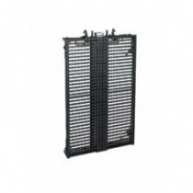