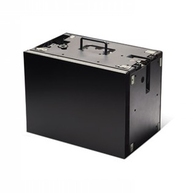 Combining the strengths of DLP and LED technology, Christie
MicroTiles have higher resolution, brighter images and a much
wider color palette than conventional LCD displays. With tiny
seams and no practical limit to the number of tiles in a display,
Christie MicroTiles produce a nearly seamless canvas of super-fine
pixels. Images look amazing at any angle and viewing distance
even close up.
With rock-solid housing, durable screens and a long-lasting
LED light engine, your Christie MicroTiles display delivers
unmatched long life and reliability