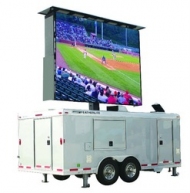 Have large screen LED video and graphics anywhere you want. The Barco B-10 is a completely mobile outdoor LED display Solution that can play back concerts, live video, sports events or virtually any kind of image you can imagine. Use it during a cycling tour during daytime and roll it to a concert that evening... The LED-wall comes in a trailer that can be pulled by a vehicle with a 3500kg towing capacity, so all electronics are stored properly and compact when travelling.

Discover how the B-10's large-screen video adds to the excitement of the event. Your crowd attendance and participation will increase along with your revenue from the concession stand. Catch all the action at sporting events or concerts and replay the highlights, or put advertising and promotion for upcoming activities onto the screen, so that your audience never misses an event.

B-10 - B10 Mobile LED Video Trailer in good condition. Previously used in rentals.