Media server from 2014. Only unsed for demos. Delivered with original packaging. 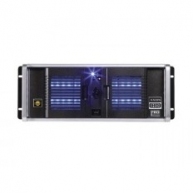 A four output High Definition media server with 40 layers of graphic playback, audio playback and a full warp engine makes this the most powerful and competitive product in the market today. As well as a full HD graphics engine, the Axon HD Pro is 4k ready.
The upgraded graphics engine also allows for pixel accurate playback of content!
Features including Collage Generator and Curved Surface Support are also included as is the largest library of stock content available in the market. The stock content has been enhanced with the addition of new HD content, allowing users to create stunning visual environments without necessarily relying on expensive custom content. Dual HDSDI capture facilities also come as standard.

Alongside the quad graphics output is a dedicated output for the CMA.