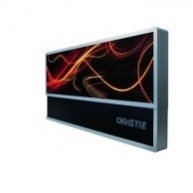 Using the strengths of both DLP projection and Light Emitting Diode (LED) technology, Christie MicroTiles offer substantially brighter images and a much wider color palette than conventional flat panel LCD and plasma displays. With no practical limit to the number of tiles in a display, Christie MicroTiles produce a virtually seamless canvas with an unlimited number of super-fine pixels. The tiles modular, flexible design means they blend into any environment.